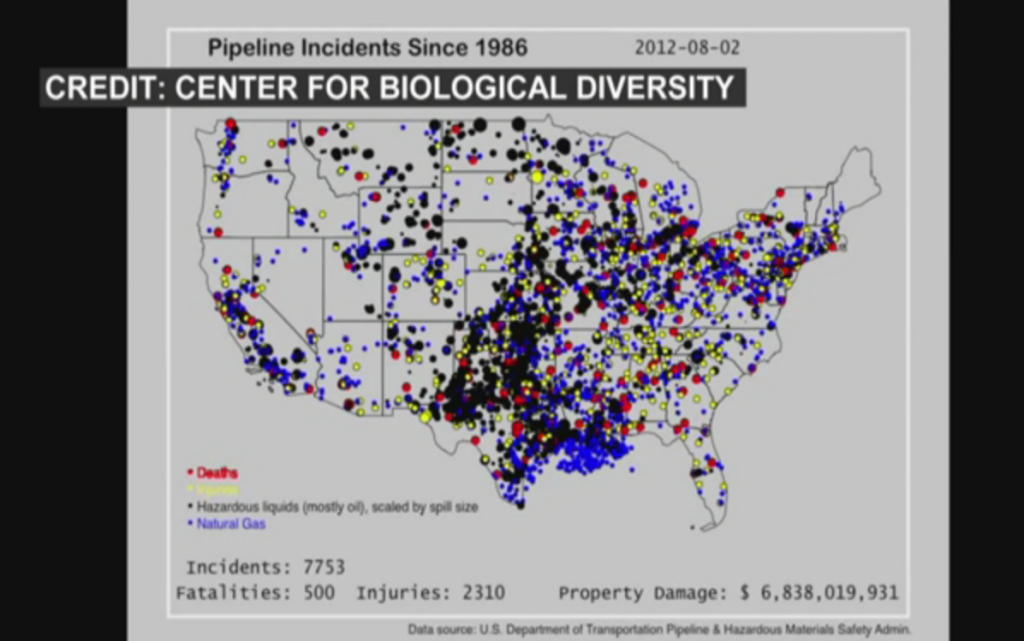 This week’s Map of the Week can be a tool to teach your children primary colors, United States geography and corporate criminal negligence.

“This is not a spill. A spill is something that happens by accident. You knock over one of these cups on the table, that’s a spill, this is a permanent state of criminal negligence.”

Josh Fox said that back in January of 2014 when he was on MSNBC to talk about 300,000 West Virginians who no longer had access to safe drinking water because thousands of gallons of MCMH, a chemical used to clean coal, had leaked into the Elk River.

What Josh emphasized on the show was that this wasn’t an anomaly. This wasn’t an accident. This is how coal, oil and gas companies do business.

In 2012 alone there were 6,000 oil, fracking fluid and contaminated wastewater spills in the United States. That’s 16 spills a day.

People pay attention when 300,000 people don’t have water to drink or Southern California Beaches are covered in oil, but as you can see in our Map of the Week the fossil fuel industry, from extraction to delivery,  operates under a permanent state of criminal negligence.

Today we can see the cost of that negligence very clearly in the news coverage of the Refugio Oil Spill. Americans can see the seals, pelicans and beaches covered in thick black oil.

My parents live in Redondo Beach, California about two and half hours south of the spill. In February, there was an explosion at the Torrance Exxon Mobil Refinery three miles from their home. When I saw that nine miles of beach from El Segundo down to Redondo Beach had been closed on Wednesday because tar was washing ashore, I experienced a truly terrifying moment where I felt like the fossil fuel industry was coming after my family.

Then I realized there are millions of Americans that must feel that fear everyday. The 15 million Americans living within one mile of an oil or gas well. The 25 million Americans living within a crude-oil bomb train derailment evacuation zone. The families living near proposed pipelines, LNG Ports and fracked-gas power plants. Every day they must fear the fossil fuel industry coming in and destroying everything they love.

And the number of families on the fossil fuel chopping block is only growing.

Can someone please share our Map of the Week: Pipeline Incidents Since 1986 with Governor Wolf?

And with George Armstrong? He’s the CEO of the company that owned the pipeline that caused the Refugio Oil Spill, who, while defending his company’s safety record said that ‘sometimes bad things happen to good people’.

With the fossil fuel industry looking to expand oil and gas production in the US, I’m sure we’ll only see more bad things happen to good people.

These types of ‘incidents’ and ‘spills’ will keep happening until the day we replace fossil fuels. And we can replace them. With current technology we can run our country on 100% renewable energy.

We don’t have to accept oil spills as the cost of doing business. We can demand the alternative- democratic, renewable energy, and all enjoy the sun spills on the beach.

Thanks and have a great weekend!

P.S. If you have videos or maps you’d like us to share on our blog please email me at leeziesche@gmail.com

P.P.S Please consider chipping in so we can continue to share this vital information. Donate Here