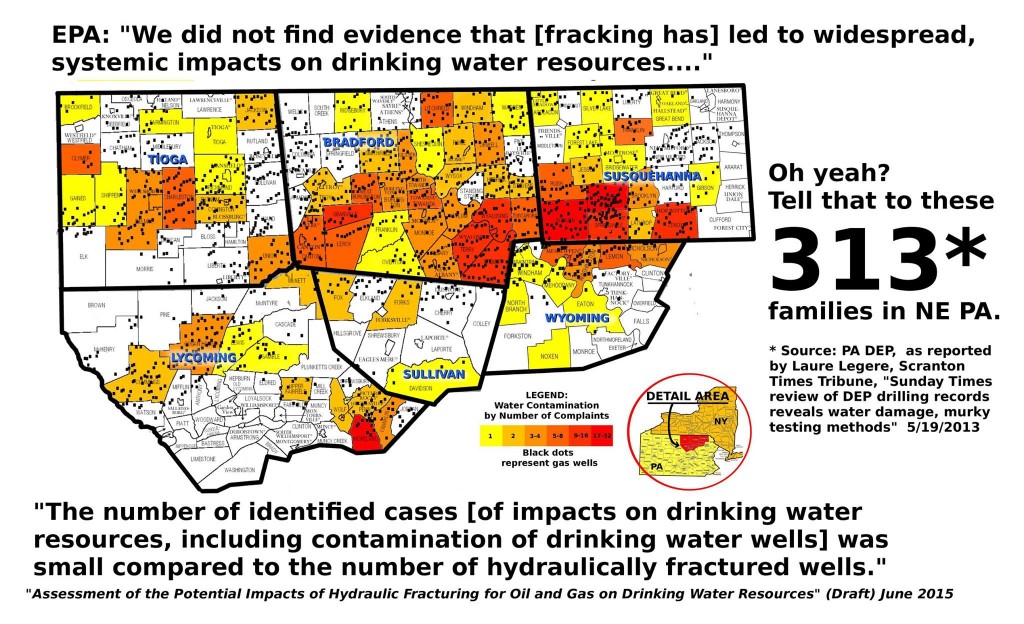 Our Map of the Week confirms widespread, systemic contamination of United States regulatory bodies by the oil and gas industry (and that water contamination due to fracking is widespread too!) Credit: BH/NY Friends of Clean Air and Water CC-BY-NC All other rights reserved

In a draft report 5 years in the making, the EPA has confirmed that fracking does indeed contaminate drinking water, a fact the oil and gas industry has vehemently denied.

But instead of dismantling the industry’s ‘not one single case of groundwater contamination caused by fracking’ refrain, the EPA decided to go with the misleading headline ‘there is no evidence fracking has led to widespread, systemic impacts on drinking water resources’.

It’s a puzzling conclusion since their study was conspicuously narrow (they did no new case studies, dropped three marquee cases that proved water contamination, and dropped all air quality studies from the report).

Our map of the week shows 313 cases where families reported water contamination due to drilling in just six counties in North Eastern, PA. Seems pretty widespread to me for a fracking and drilling campaign that’s still in its infancy. So far there’s been around 9,000 wells drilled in PA. One report showed the potential for 200,000 – 600,000 fracked wells in the state.

If the EPA is looking for proof of ‘widespread’ contamination before declaring fracking unsafe, they may not have to wait long. The industry’s own data shows that 5% of fracking wells leak upon drilling and that number only grows over time.

What the EPA presented to the public today was PR, not science and proof of the widespread, systemic contamination of our regulatory bodies by the oil and gas industry.

This isn’t the first time the EPA has released a report burying the science with a misleading headline that supports the Obama administration’s pro-fracking policies rather than reveal the true dangers of fracking. It’s a disturbing trend we reported on extensively in GASLAND Part II with cases in Dimock, Pennsylvania, Parker County, Texas and Pavilion, Wyoming.

In Dimock, Parker Country and Pavilion the EPA suddenly dropped water contamination cases when the science proved that fracking was the cause, going as far as slapping a press release claiming Dimock’s water was safe on a report that proved fracking had contaminated the water.

The EPA did this, conveniently, around the same time that President Obama was touting fracking as part of his All-of-the-Above energy policy on the campaign trail.

And President Obama has not backed off in his support for natural gas despite mounting evidence that fracking is a climate change disaster. His administration is opening up huge swaths of BLM land for drilling and has even gone so far as to allow fracking offshore in the Gulf of Mexico.

He’s not the only one. As Secretary of State, Hilary Clinton sold fracking to the rest of the world and has said nothing to indicate she will do any differently as President, despite claiming that addressing climate change is a pillar of her campaign.

If Barack and Hilary want to know what a fracking legacy looks like they should take a look at the pictures coming from Little Rock, Arkansas where a fracked-gas pipeline ruptured in the Arkansas River within view of Bill Clinton’s Presidential Library. 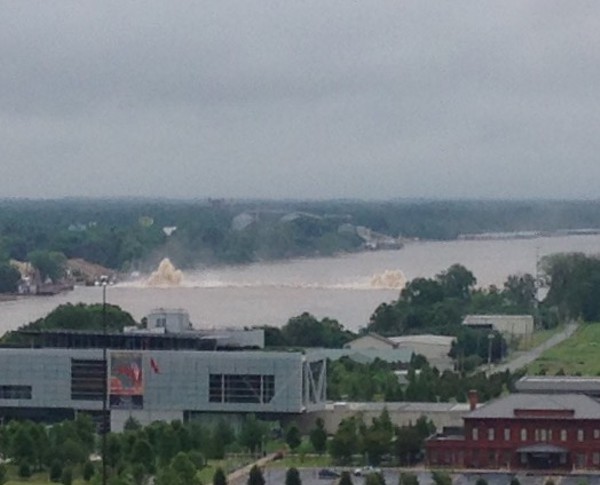 Millions of Americans know that fracking contaminates ground water and for the EPA to report any differently only proves that greatest contamination from the industry comes from its influence and ownership of our government.

It’s clear there is no action coming from our politicians to protect our public health and safety from fracking. They will stick with the industry till all our water is contaminated, our air polluted and climate change has made our planet unlivable.

It’s up to us to get the truth out.

If you want to educate your community on the dangers of fracking and the incredible influence of the industry on our government, email us to host a screening of GASLAND Part II at screenings@gaslandthemovie.com

P.S. If you have videos or maps you’d like us to share on our blog please email me at leeziesche@gmail.com

P.P.S Please consider chipping in so we can continue to share this vital information. Donate Here