Community isn’t a word we use very often these days.  We can leave our homes, get in our cars, go to work, get back in our cars and go home, without ever having any real, meaningful interaction with our community.

But if you want to see what community looks likes in 2015 turn to Denton, Texas.

After years of trying to work with the oil and gas industry to regulate fracking wells that were dangerously close to homes, schools and hospitals, causing their community to have some of the most unhealthy air and highest rates of childhood asthma in Texas, the people of Denton realized they only had one recourse left – to ban fracking in their town.

They needed 500 signatures to get the initiative on the ballot.  They got 2,000.

The ban measure passed overwhelmingly with almost 60% of the vote and Denton became the first town in Texas to ban fracking.

On May 18th the State of Texas took their hard fought, community victory away. Governor Greg Abbot signed into law HB 40 which puts corporate profits over public health and banned fracking bans in Texas.

Once again the citizens of Denton, Texas realized they only had one recourse left – civil disobedience. 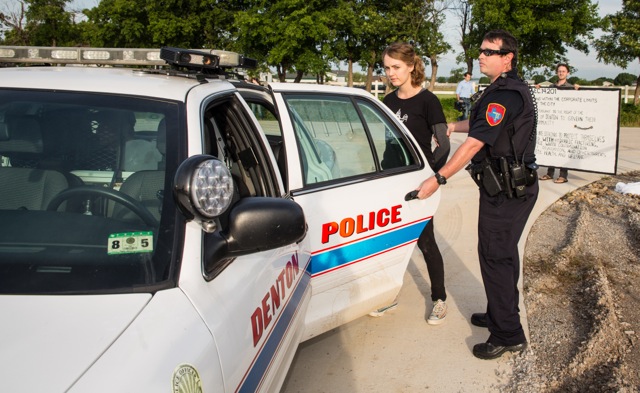 A couple weeks later Oklahoma passed a similar law banning fracking bans, despite a terrifying surge in earthquakes across the state that has been linked to fracking wastewater injection. As Amy Goodman reports on Democracy Now! in our Video of the Week, the American Legislative Exchange Council(ALEC), a Koch Brother funded group,  is behind the laws in both states.

These groups are powerful. They represent the wealthiest industries in the history of humanity, but do you want to know what’s more powerful?

Communities like Denton, Texas where citizens are putting their bodies on the line to enforce the people’s ban. Communities like We Are Seneca Lake where there has been 279 arrests of citizens blockading a Texas based company from storing fracked gas under Seneca Lake.

These are people who are willing to risk their personal freedom and get arrested because they know, if they do not act, the risk is even greater.

Please watch and share our Video of the Week. And please consider chipping into the legal fund of those that have been arrested in Denton, Texas. Donate here:https://www.everribbon.com/DefendTheBan