WE ARE SENECA LAKE- A CALL TO ACTION FROM JOSH FOX AND SANDRA STEINGRABER from JFOX on Vimeo.

The same day that New York State released its final environmental impact study on fracking, a report almost seven years in the making, Josh was arrested protesting the storage of fracked gas in salt caverns under Seneca Lake.

Even though it is now official state policy that fracking for natural gas is too dangerous and great of a threat to public health to proceed, New Yorkers are not safe from fracking.

“We’re getting fracked through these infrastructure projects,” says author and advocate Sandra Steingraber in our new mini-doc on We Are Seneca Lake. Sandra has been one of the leaders of the 8 month sustained civil disobedience campaign to protect Seneca Lake. So far there have been 272 arrests. 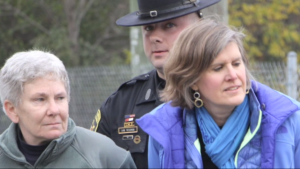 Despite not being able to frack in New York, the oil and gas industry wants to turn this agricultural area of the Finger Lakes into a hub of fracked gas storage and transportation for the Northeastern United States and Canada.

Beyond the Finger Lakes, the oil and gas industry’s vision for New York also includes hundreds of miles of pipelines that will transport fracked gas out of Pennsylvania to market, and building more gas storage facilities, compressor stations and natural gas fired power plants so New York businesses, homes and apartments are running on fracked gas instead of safe, renewable sources like solar power.

The fossil fuel doomsday plan also includes building a liquefied natural gas port off of the shores of New York instead of offshore wind.

And it’s not just fracking infrastructure in New York that’s putting citizens at risk. With the support of our federal government, the fossil fuel industry is expanding extreme energy development across the world.

That’s one of the reasons why Josh decided to get arrested on Wednesday. 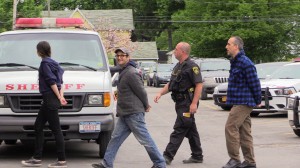 As he says in the mini-doc “This is a nationally symbolic moment. We can’t sacrifice any more Seneca Lakes. Time is up for the fossil fuel industry. We can’t lock ourselves into decades more of fossil fuel expansion whether that be pipelines, power plants, storage facilities, fracked gas wells, tarsands fields, deepwater drilling. We have to start binding these fights together.”

We need to start building the alternative- democratic, renewable energy. Because we know that the only true ban on fracking is to replace the fuel. 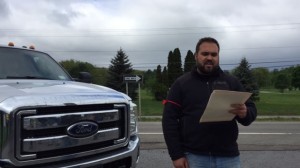 Joe Sliker, CEO and President of Ithaca based renewable energy company Renovus Energy, was arrested alongside Josh and 19 other Seneca Lake Defenders. While blocking a Crestwood truck he provided an alternative to the fossil fuel vision for New York, he offered jobs in the local solar industry.

Please watch and share our video of the week and join the movement to build renewable energy at www.SolutionsGrassroots.com

Thanks and have a great weekend!

P.S. If you have videos or maps you’d like us to share on our blog please email me at leeziesche@gmail.com
P.P.S Please consider chipping in so we can continue to share this vital information. Donate Here