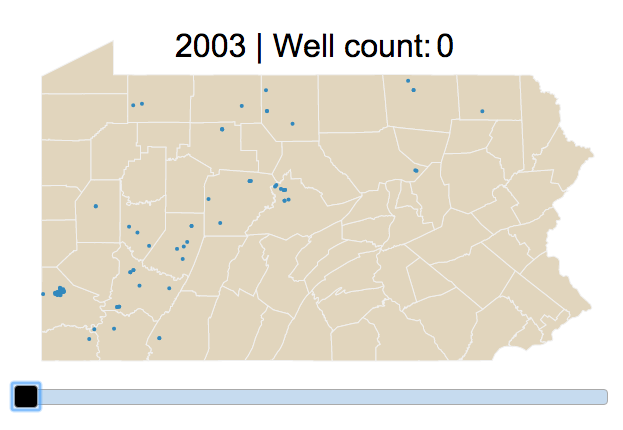 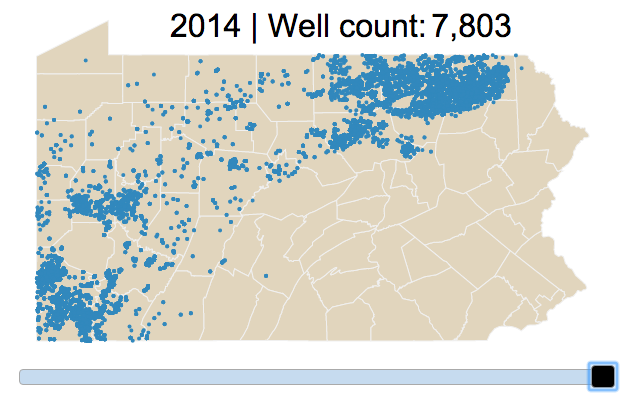 It seems like almost every day a new study or investigative report comes out of Pennsylvania’s Gaslands. They confirm what families have been saying for years- fracking is harming Pennsylvania communities and the government is failing to protect them.

Our Map of the Week comes from a new series by PennLive on fracking. ‘The Shale Bargain’ series is the result of a six-month long investigation that found the Department of Environmental Protection “relied heavily on energy companies to largely police themselves and, in the process, ignored citizens’ constitutional right to clean air and water.”

Knowing how much damage has already been done, it’s terrifying to imagine what that map would look like with 60,000 wells.

The Pennsylvania Government is on board with fracking overtaking the state and is more interested in protecting the industry than its citizens. Something we’re seeing in many fossil fuel extraction states.

But all over the country scientific evidence and public opposition is mounting against fracking. We wont stop until fracking is banned everywhere. Below are three powerful tools that you can use to share the truth about fracking with your community and elected officials.

Educate and activate your community:

Shalefield Stories -Volume 2: Shalefield Stories is a powerful compilation of first hand testimonies from people who have been harmed by dangerous drilling in the oil and gas shalefields across the US, many of whom are suffering in Pennsylvania’s Gaslands.

GASWORK, The Fight for C.J.’s Law – GASWORK is a new short film by Josh Fox that investigates dangerous working conditions in the oil and gas fields.

Watch the film and take action at www.gasworkfilm.com and email screenings@gaslandthemovie.com to host a community screening

Thanks and have a great weekend,
Lee Ziesche, Grassroots Coordinator

If you have videos or maps you’d like us to share on our blog please email me at leeziesche@gmail.com