Josh Fox has been the target of vicious misinformation campaigns before. You can read about them here and here.

But if you haven’t heard what happened this week stop right now and watch this:

The oil and gas industry knows that environmentalists are not in some secret plot to destroy American energy independence.

Millions of Americans have joined one of the strongest grassroots movements in history to oppose fracking because it threatens their health, environment and communities. The industry knows that these people and celebrities like Mark Ruffalo and Ed Begley Jr. are working towards true American energy independence through the development of renewable energy.

We know that real energy independence is democratically sourced renewables.

Our grassroots movement is honest, real, truthful and proud.

Here’s a tiny reminder, a crowd in Cooperstown yesterday greeted President Obama and people in Long Island greeted Governor Cuomo with Anti-fracking signs. There were no middle east oil barons, and no celebrities, just folks working for a better world. 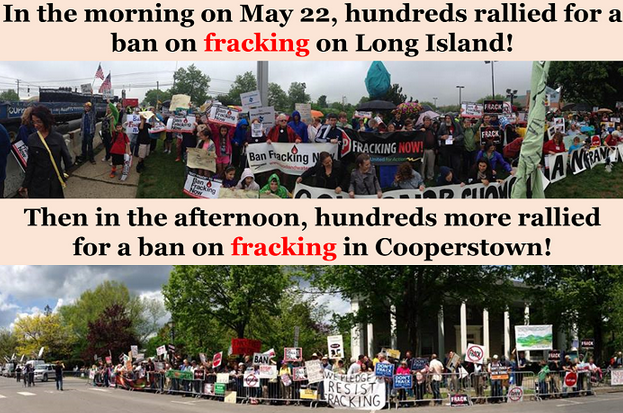